According to WSSRC the 24 hour distance outright is taken by:

The best windsurfdistance records over 24 hours is less than 220nm, 9kts. And it is not even ratified official... Maybe it is time to try some distance sailing. OK the chance of beating the outright records isn't there...

If I would speak for myself my session speed is about 16 kts average, highest 1-hourrecord is about 23 kts. I would say that it should be possible to break at least the 300nm...

Only the right equipment/ wind/ good support is the key

But One RECORD is really impressive

Captain Alexander Newlands, was the fastest for more than a age.

My common sense tells me there is a chance, but don't think it will be easy. Everything has to be right. Human condition & Weather & Gear have all to be right for 24h... Is it windy on Full Moon? haha
0 Responses Labels: distance, Speedrecords

Just got a pic from Jeroen Labots (another fast Amstelmeer sailor), me sailing the NP RSR 6.7. (not my own).
It was a great session, tested the new Fanatic Falcon 89. And must admit I am really starting to like this board.
0 Responses Labels: Surfsessions

Yeehaaa, there is wind. Have had some great sessions, not all real speedsurfing but very nice sailing, sun&wind are rare in the Netherlands.

A few weeks ago, I finally got the Plasma. I ordered it for my brother. He is compared to me a heavyweight. So the weekend after we got the sail we tested it on the local lake (Amstelmeer), in my opinion there was NO wind when we arrived. Because the water state was soooo flat. I guess that the wind would max gust to 10kn. And most of the time the wind was 5kn.

My brother was really excited and went on the water with the Plasma & Starboard Start (220 literss). I couldn't believe what I saw the next minute. He was planning!!! The Gaastra Plasma just got loads of power, the SB start vin could barely hold that power. Normaly my brother would plane on a 8.5 m2 sail in at least 12-14kn.

So When he came back I jumped on, and it was just amzing how light/silent this sail performed. I just really liked it in no wind conditions, had a great time.

Ultimate Speed Meeting (Strand Horst)
The day before I just got my first Neilpryde (yeaah) The RSRacing 5.8. I was really lucky that Peter de Wit lent me a 400 mast, so I could try the sail during competition. First impression was just great, however I was also trying a 30cm SO7 Select underneath the CA SP50, and that vin was too Big. My Feet had really a lot of pressure, and my condition/strenght wasn't able to control.

Soo, I took the faster brother out, the CA SP44, with Select SL7 Silver 25cm. Immediatly I took the fastest topspeed of that day (76kmh). During that run I could feel how good this combination matches. But after that run the wind dropped, my mistake was to sail to tight after that run. After burning all my energy, I went back to the beach and found out that the flag was dropped. So competition was over.

My average was the worst one ever, but I am not dissapointed at all, because it makes sense why I couldn't make 5 fast runs. 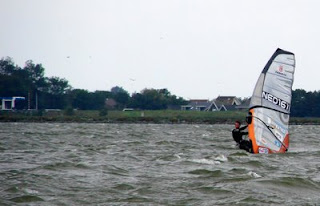 After the USM I descided to surf on every occasion, because I need condition/strenght to perform. So I had some sailing in light condition for a 5.8, but it was really nice to get 100km on the dail.

It feels damn good to be back @ Lago di Amstel, it is not a speedspot at all. But it feels like home. Can't wait for the next session (I hope with the local boys).

I also got my own NP X9 4.00m mast, NP 160-210 X9 boom, MXT Extender + mastfoot, and it is just great equipment. It just really works great together. I think that I will replace my North harnass very soon...

Strand Horst
Yesterday I ruined my Select SL7 29cm by adjusting it I accidentily damaged the lay-up really bad. I know almost for sure it will break when I use it in extreme conditions. I did the Select SL7 25cm too, it looks now great (happy I didn't ruined that one)

Today I tryed my perfect finished Select SL7 25cm, in almost no wind... Windguru promised me about 25kn of wind. But when I opened my car's door the wind somehow went away. DAMN...

I can't say I was really competitive, but I know the fin is really good, I feels bombproof in bigger chop.
0 Responses Labels: Surfsessions