Speedsurfing is not always the same, we made an overview of the disciplines in speedsurfing. Many speedsurfers specialise in 1 or 2 disciplines.

Open Water Speed
I guess this is the most common discipline worldwide, just going on open water with your GPS, often not very deep downwind caused by chop/waves. Boardspeed is inbetween 25kn-35kn, sometimes we even see speeds up to 40kn. Best to suit these conditions would be a slalomboard. 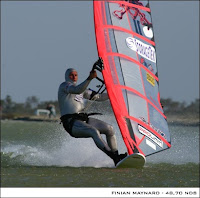 Offshore Speed
This is the most popular one to break personal records, when the wind is 110-125 degrees offshore it is perfect and often stays flat (even in 40kn wind). GPS is used often, but for official records videotiming is also still being used. With offshore speed the speedrecords have been sailed, up to 50kn+ peaks.

Shallow Water Speed
There are a few places in the world with limited depth for a big area. When an area of water is between 0,3-0,5m deep. These places are special, because you can go up to 150 degrees deep downwind (without much chop). For these places GPS is used and high speeds have been recorded, up to 45kn.

Lightwind Speed
This discipline is rated by windstrenght, up to 20kn of wind. Some speedsurfers have trained for a lot of hours to boost efficiency in 20kn max, I have seen some doing 40kn boardspeed in 20kn wind. There are just a few speedsurfers that are able to do such efficient ride.

Highwind Speed
This discipline is rated by windstrenght, higher than 40kn of wind. It is hard to get experienced in high wind, the only way is to go for it (because you only get maximum 3 shots per year). There is a really tiny group of speedsurfers capable to do high speed in these conditions.